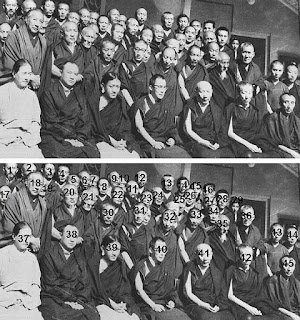 This  photo shows Tibetan lamas from all the major Tibetan Buddhist traditions  at the occasion of the the very first Dharma meeting held in His  Holiness the Dalai Lama's first residence in exile, in Dharamsala, North  India, 1963.

Dilgo Khentse Rinpoche is  on the backside of the 16th Karmapa and Dudjom Rinpoche. There are many  more eminent scholars from different schools of Tibetan Buddhism  including Gen Pema Gyaltsen and others in this picture.

There has been an effort to idenfy all Masters on the photo by mrtn@xs4all.nl:

16  Ngawang Thondup Narkyid, the co-author with Melvin Goldstein of the big  red "English-Tibetan Dictionary of Modern Tibetan," and collaborator in  the "Fluent Tibetan" language course out of the University of Virginia.  He is currently the biographer of HH the Dalai Lama, and works in HH's  office in Dharamsala. After careers as an official in the Potala in the  1940s and as a "young communist" in Beijing, he became a guerrilla after  the 1959 Lhasa Uprising and made his way to India, then eventually to  the University of Michigan where he received a Masters degree in  Linguistics. He has travelled and taught extensively.

17 Could be Tulshik Rinpoche one of the spiritual masters of HHDL.

28 Sha-gor Ken-dru (sp?), currently not a monk; living in Switzerland

A Gelug lama Dagyab Kyabgön Rinpoche who now is living in Germany and is a teacher of Chödzong [www.choedzong.de].

45 Kushok Bakula, who is sometimes called the head lama of Ladakh, at one time (currently) ambassador to Mongolia.